This is the blog income and traffic report January 2016!  If you are interested and want to see all our other income reports click here!

Back in November/December I was worrying about the January report, as I was half expecting my income to have dropped to about £500.
Fortunately I got some new freelance and sponsored work lined up at the beginning of the month, so although I’m down a few hundred quid on last month, it’s not nearly as bad as I thought.

I currently do regular freelance recipe/photo work for 4-5 websites, which means I can be working on up to 28 recipes a month – including those for Kitchen Sanctuary. Needless to say, my kitchen is nearly always covered in pots and pans, and there’s always something to nibble on (part of the reason I think I’m never going to lose that half a stone).

After the frantic busy-ness of Nov-Dec, I expected January to be a lot quieter, but that hasn’t been the case. In order to ensure I’m not ignoring everything else outside of blogging (including my gorgeous husband and kids), this month I’ve been working hard to try to find some balance.

So what does this mean for me?

Trying to switch off

My brain is constantly whirring with recipe ideas and to-do lists. This means I often find myself being distracted when I’m with the kids or Chris. Asking them to repeat the question, only half looking at the picture they’ve drawn, being happy that the kids want to watch a film so I can get my laptop out (rather than sitting down and enjoying it with them). Part of the reason I gave up working in the corporate world was to spend more time with my family, so now I’m making a concious effort to switch off most evenings.
Trying to work on the blog in that distracted environment doesn’t really work anyway. I’ve figured out that it seems to take me 3 or 4 times longer to do something if I’m trying to do it in the evening, which isn’t productive for the blog, fun for me, or kind to Chris and the kids.

Up until recently, I was waking up at the same time as the children, getting them ready for school and then starting work after dropping them off. This meant a start time of 9:15am, with a stop time of 3pm (school pick-up). Then a couple more hours after school whilst the kids were playing, and several more hours after the kids had gone to bed.
I’ve never been a morning person. In an ideal world i’d happily sleep 2am-10am every night, but that’s never gonna work. Since I have to force myself to get up at 7:45 anyway, why not just make it 5:45 or 6am instead? Both are just as torturous as each other!
So that’s what I’ve been doing.
I’m still doing a couple of hours after school, but I’ve been able to cut back on evening work a lot.

Sometimes having to say no

I like to set myself targets for the year in terms of income, training, social media, growing Kitchen Sanctuary etc.
If I get additional freelance work requests through that would take me over my income target, it’s extremely hard to say no. However, saying yes is also likely to affect one of my other targets. i.e I’d be getting more money, but would have less time to spend growing Kitchen Sanctuary.
So I have to figure out if the additional freelance work is rewarding enough to either a) Put in some additional hours, or, b) reduce my time on a Kitchen Sanctuary specific task.
Which means I actually managed to say no to some paid work in January! Is that a ‘Yay’ moment? I’m not sure yet 🙂

I’m only just getting to the point where I’m earning what I need to make Kitchen Sanctuary my full-time job. However, I can’t help but consider whether I’d be able to earn more by freeing up some of the time that I spend on KS tasks outside of the kitchen.
They do say you need to spend money to make money, but I’m not sure I’m ready to take the leap of letting someone else help yet!
If you’re a blogger who hires some outside help, I’d love to hear from you!

Ok, that’s all for now on finding balance, let’s get on with some numbers. I really hope the info in this post gives you some insight and ideas if you’re new to blogging and monetization.  Also check out my How to Start a Food Blog post if you are thinking about giving this blogging thing a go too!

Despite an increase in traffic, my ad revenue went down in January. I’ve been told that’s a normal part of the ad budget cycle. Companies will spend more in December to use up any ad budget they have left, so there’s usually a stark contrast between December ad spend and January ad spend.

January was a really good month – with over 140,000 page views!
I got a couple of recipes included in Buzzfeed round-ups, and also a featured recipe on The Berry. In addition to that, I also took part in hosting a giveaway. I think each of these areas helped with the increase in traffic (28k more pageviews than last month).

Here’s a screenshot from Google Analytics for January:

And here’s a breakdown of the traffic sources based on the number of sessions: 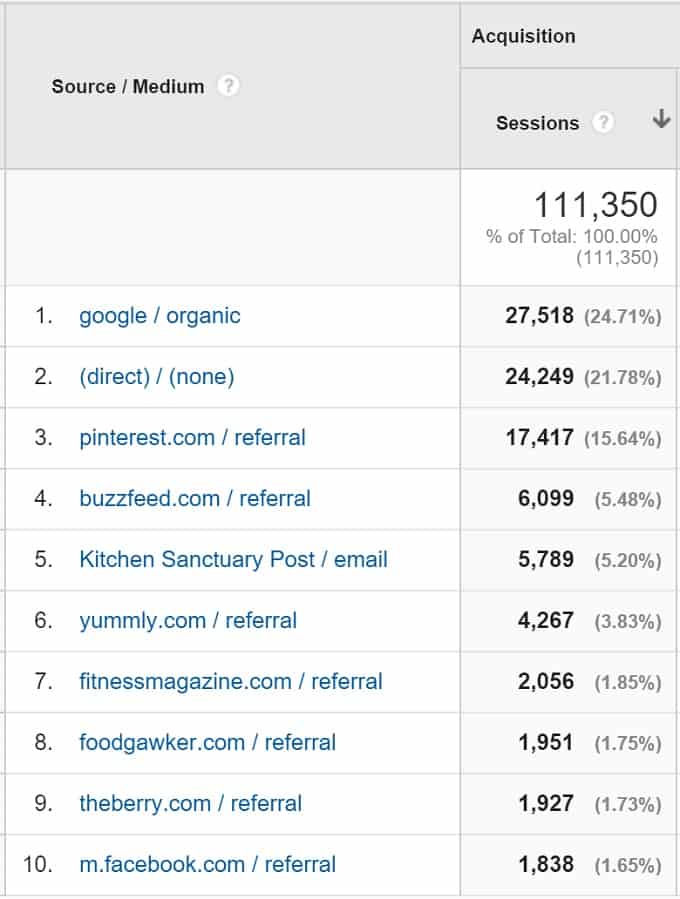 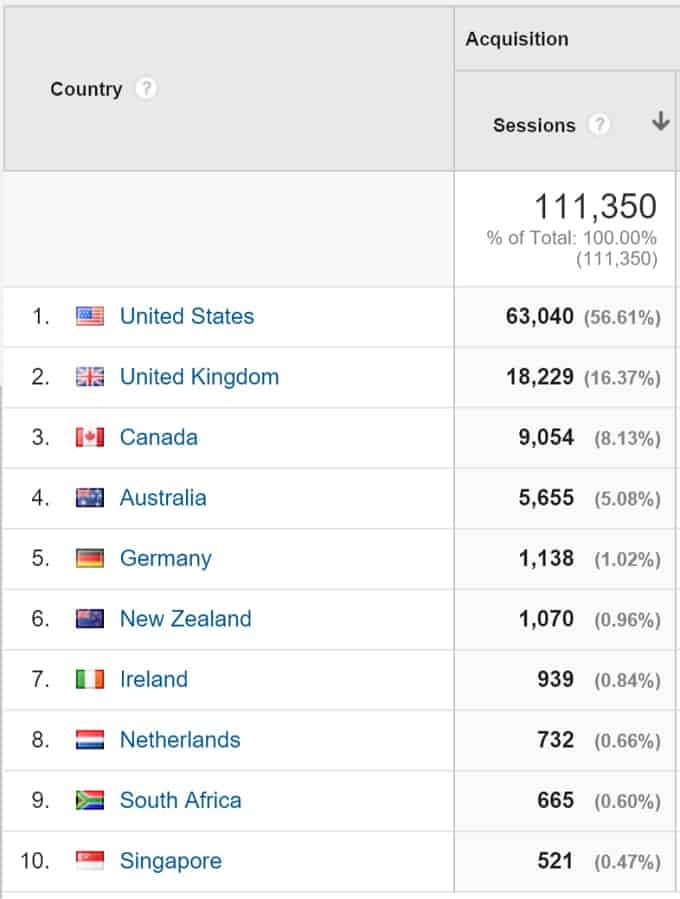 I took part in hosting a giveaway in January with a bunch a other bloggers. The prize was a whopping $700, but because there were quite a few bloggers involved, sharing the cost of the prize was pretty low.

Readers could enter the giveaway by following the blogger’s social media profiles, leaving comments etc.
For me, that resulted in a really good jump in my social media following. For example, I get an average of 200 Pinterest followers a month, but last month, this jumped up to 600 new followers!
That initial outlay was way more beneficial in improving my overall social media following than spending the same amount on Facebook/Twitter advertising.

Not strictly a takeaway or lesson-learned, however I can’t help but let you in one of the little food blogger perks I got at the end of Jan.
I was invited to attend the Young Finn Crisp Chef 2015 luncheon in Sheffield, where I got to completely stuff myself with so much amazing food!
Fiona Bailey – who won with her Black Forest Gateau – was a student at Sheffield College (where the luncheon took place), and I was truly amazed at her skill and that of the other young chefs who worked alongside her.

Oh and I also got to sit with celebrity chef Cyrus Todiwala and his lovely wife Pervin during the meal. I tried to look cool, but I don’t think I got away with it.
Here are a few pics of just some of the dishes (the winning dish is top left), and also me trying not to look starstruck with Cyrus (curse that overhead lighting and my shiny forehead!!). 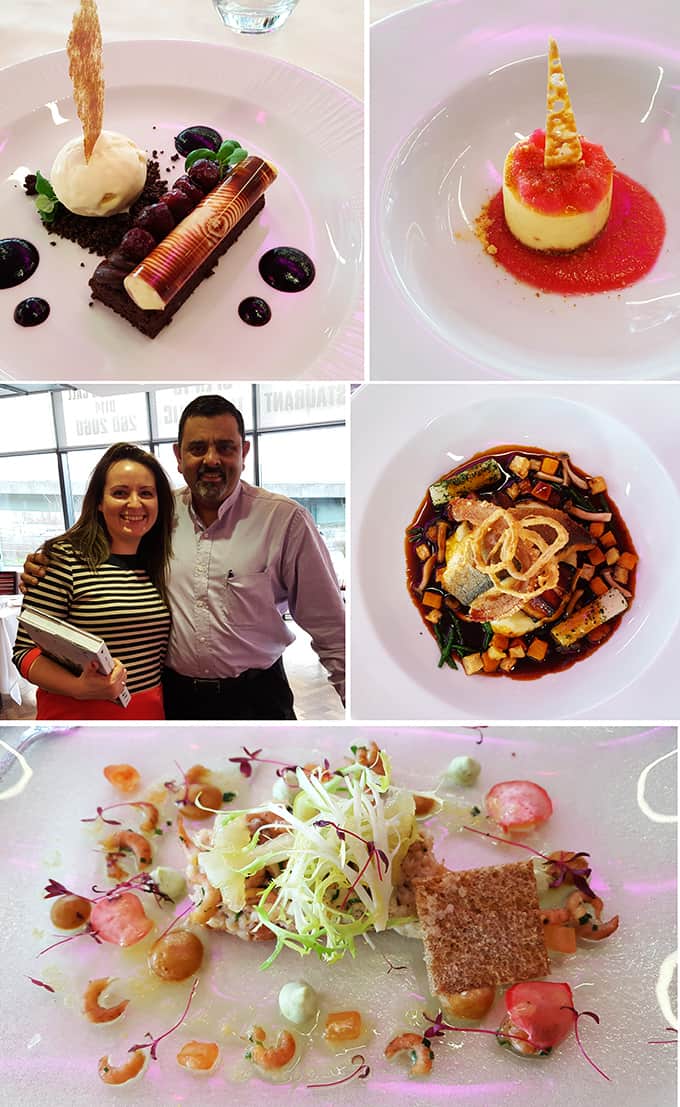 That’s all for the Blog income and traffic report January 2016 folks. Let me know via email or in the comments if there’s anything in particular you’d like me to go over next month.