This is the blog income and traffic report March 2016!  If you are interested and want to see all our other income reports click here!

Welcome to my sixth income report! Check out 1, 2, 3, 4 and 5 here.
One thing I can certainly say for my income over the past few months – Inconsistent!!

February was a fab month for me with lots of freelance work including some magazine work. March, however, was a little quieter – but I’m not complaining. I got to enjoy a bit of time off over Easter, and we even made it over to rainy Wales for a couple of days!

I’ve also had a little more time to fit in some personal training sessions. Yes, my PT Kelly, is trying hard to reduce my body fat proportions from the horribly scary number that’s burned on the back of my retinas, to something that I wouldn’t be totally ashamed to say out loud.

I’ve also been changing things up a little in the ad space on Kitchen Sanctuary (more about that later) as well as trying to keep two easter-egg filled kids occupied over the Easter holidays.

Now let’s get on with the numbers. I really hope the info in this post gives you some insight and ideas if you’re new to blogging and monetization.  Also check out my How to Start a Food Blog post if you are thinking about giving this blogging thing a go too!

Not a bad month, but a good 12k views fewer than February. I think March/April and early May tend to be a quieter months – Christmas is over, Summer BBQ/Party season hasn’t yet begun. It’s just a little bit of a ‘blah’ time.
I’ve also haven’t been as good with social media sharing and submitting to food photo sharing websites etc. recently. It’s something I’m trying to improve upon at the moment – I need to build it into my routine instead of leaving it too low on my priority list. Plus I’ve come to a conclusion about some of my post content that may be hurting my traffic (see the last section of the report for more info).

Here’s a screenshot from Google Analytics for March:

Here’s a breakdown of the traffic sources based on the number of sessions. There was a definite drop in Pinterest traffic in mid March – and I wasn’t alone. More about that further down. 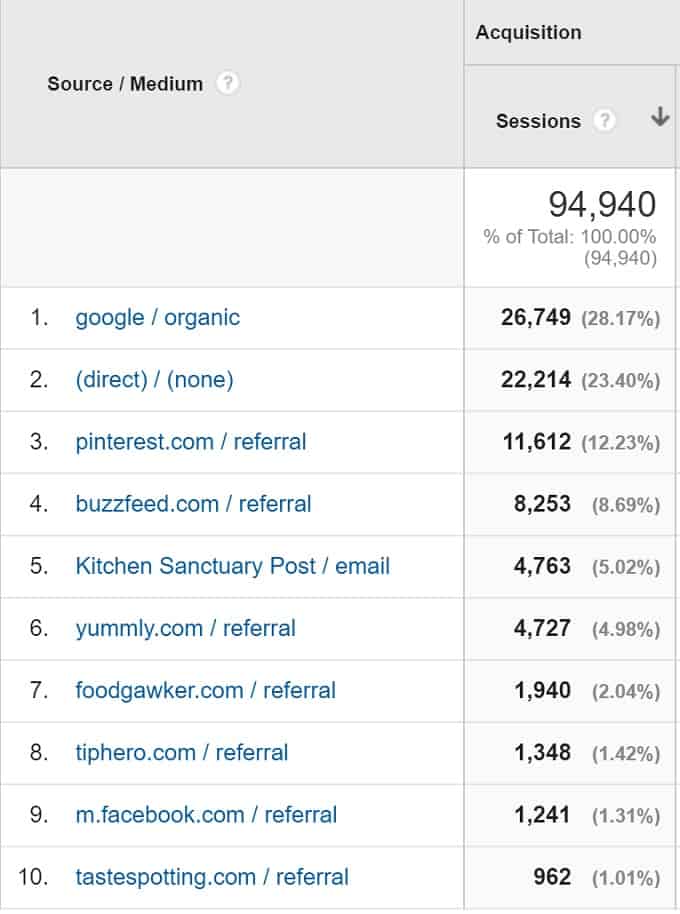 So you made have read in the income section that I’ve left Blogher. I actually signed up to Mediavine in April, which means I’ve also taken down my Gourmet ads and Google ads.
Mediavine is a company that completely manages the ads on your site. No complicated coding, spending hours experimenting with different ad networks or setting up of waterfalls (something I’d been meaning to do for months but never got round to it. If you haven’t heard of ad waterfalls, Nagi from Recipe Tin Eats explains it well here.).

Mediavine do it all for you. I signed up with them about a week and a half into April. I’d heard good reports that they can improve ad revenue, and they work closely with bloggers to provide the best service possible.

So far they’re great! Initially I was a little overwhelmed with the number of ads showing up on the site. I have fewer on the sidebar, but more in the content. You can request any of them to be removed, so I immediately got rid of an ad that popped up at the bottom of the screen on laptops/desktops – as I find those so annoying! I’m going to leave the rest for now so I can analyse the income.

I’m not sure I’ll end up making more money in April on ads – since I did the swap over almost halfway into April. Also, I’ve been told it takes a couple of months to get to the optimum revenue – as it takes a little time for them to find the best ads and ad locations for your site.

However, I’ll be sure to report back in my April income report.

What’s been going on with Pinterest!! March the 14th 2016 was a day that many bloggers saw their Pinterest traffic drop. In some cases (mine included) it dropped by 50% or more!

I’ve heard rumours of algorithm changes, of paid pins taking priority and also of suggestions that it’s just down to seasonal traffic peaks and troughs.

I’ve no idea what actually caused it, but I know my google search traffic didn’t significantly drop during the same date range (ruling out the seasonal traffic theory).

About two days ago, quite suddenly, it went back up again. I’m not sure if whatever happened has been resolved, or if there’s another reason, but I’m keeping my fingers crossed that it will continue to rise!

One last thing I wanted to touch on is regarding some of my freelance work. For some sites that I’ve previously worked on, and one that I still do, part of the agreed deal for me creating recipe posts for them is that I can re-publish the post on my own blog after a month or so.

Initially this seemed like such a good idea. After all, I put a lot of time and effort into my freelance posts, and I don’t get to share it with you guys too (except on social media of course). I figured that there’d be enough SEO juice* to go around and it’d save me a whole bunch of time not having to create quite as much content during the month.

*by SEO (Search Engine Optimization) – I mean how high up on a search results page my recipe would appear if someone googled a search term that referenced one of my recipes.

Not wanting to completely duplicate the posts I write for this other site (Google doesn’t like duplicate content), I was sure to change:

My expectation was that by changing these, the posts would be dissimilar enough that they wouldn’t be competing for traffic.

However, my experience so far has been that my version of the posts are doing worse on google rankings then the post is doing on the other site.

I expected my rankings to be a bit worse due to the fact that the recipes on the other site go up a month before mine do. Also the other site is bigger, with more followers, than mine.

However, even if I type into Google the exact title that I used on a Kitchen Sanctuary post (which is different than the title on the other site), the post on the other site sometimes still ranks higher in the search results (especially in the google image search).

I think that despite the changes I’m making to the posts, my search traffic is being quite seriously impacted.

For the past couple of months, almost half of my Kitchen Sanctuary posts have appeared on this other website first, and I think it’s hurting my site. My traffic has gone down in the last couple of months – which could be down to the time of the year, but I’m wondering if part of it is related to this.

My plan in April is to stop (or at least drastically reduce) publishing stuff I’ve created for this other site on Kitchen Sanctuary. It’ll mean more work – if I’m to continue to post 3 times a week on Kitchen Sanctuary – but I’m hoping I’ll see my traffic start to rise again as a result of this change.

I’ll update you over the next couple of months on whether this improves my traffic.

Hope that’s been helpful, let me know via email or in the comments if there’s anything, in particular, you’d like me to go over next month.